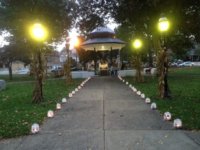 It was a crisp, October day on West Main Street in Monongahela.  A light breeze stirred the leaves that had fallen from the trees.  Evening was approaching.  A small party gathered to hear stories that would give them goosebumps . . .

For 20 years, the Monongahela Area Historical Society (MAHS) has been conducting its Candlelight Ghost Walks as a fall fundraiser.  The tour guides participants through this beautiful Victorian community revealing some of its most spine-tingling tales and spooky secrets.

However, this past fall, the Activities Director of the Residence at the Hilltop, a Monongahela assisted living facility, made a special request.  She said that although her senior residents would love to attend, taking the walking tour would just be too much of a challenge.  So, the MAHS agreed to adapt its ghost walk into a bus tour with Treasurer Carol Frye as the guide.

When the day came, about a dozen residents were in attendance.  Carol boarded the bus, and the ghost “walk” began as any other would, at the historic homes on West Main Street that were built in the 1800s.  Although the tour always touches on the hauntings and strange occurrences in these particular buildings, Carol was sure her presentation featured important elements of the city’s history like its role in the Civil War and the Underground Railroad as well as the prominent local families who called Monongahela “home.”

But then something happened – the senior residents who were from Monongahela began to share their own stories about the houses and people highlighted on the tour.  Although 70 years or more had passed, time had not worn away their precious memories of downtown shopping, the movie theatre, and growing up in this community.

The joy and excitement these older adults expressed as they shared such vivid memories was enough to give anyone goosebumps.  In fact, Carol remarked, “They told me things that I hadn’t even heard before.” So, if you dare to take the MAHS’s ghost walk, you may be surprised by an apparition of Captain Longwell, or you could be stirred by the trip down memory lane.