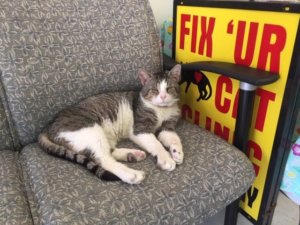 Caesar is a cat with a kingdom.

From his perch on his throne (a padded bench near the front door) in the Fix ‘Ur Cat office on Pike street, Caesar is a dignified monarch. With bowed legs and ruffled fur, he oversees the daily spay and neuter activities with a noble air, his tail twitching contentedly. He regally basks in the attention from his “subjects” (volunteers and clients), receiving tributes in the form of treats and chin scratches.

During quiet moments, he patrols his realm with an awkward gait because of his swollen paws and attentively keeps an eye out for the next client – just one eye.

It’s likely no one would ever fathom his humble origins as a feral cat of no consequence.

Last fall, Caesar’s caretaker noticed that he had developed an eye issue that needed treatment. When Caesar was brought to Fix ‘Ur Cat to be neutered, he also underwent surgical correction of his ectopic cilia eye condition, which caused severe pain and blindness. Unfortunately, despite the surgery, Caesar did not regain vision in his affected eye. However, his left eye still shines with intelligent curiosity.

Caesar spent this past winter recuperating from his eye surgery in the Fix ‘Ur Cat office. So beloved by the volunteers, it was inevitable he would become its sovereign. He still receives frequent visits from his original caretaker, in addition to enjoying the company of his other “subjects.” Caesar’s throne has room for two, and he’s a very generous ruler who is more than willing to negotiate a trade – a bench for a lap, where he’ll settle down and curl up with a kingly purr.