Operation and maintenance of a public library for the residents of the Borough of Canonsburg, Township of Cecil, and Township of North Strabane

Operation and maintenance of a public library for the residents of the Borough of Canonsburg, Township of Cecil, and Township of North Strabane

A Donor's a Donor, No Matter How Small!

8   people have liked this story. 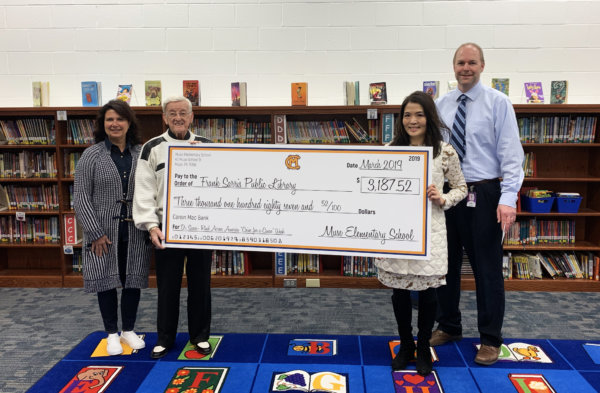 The students were dressed in a Dr. Seuss way,
ready to work but also to play.

Here was a Who and a fish that was blue.
There was even a Cat in the Hat (or two).

But they weren’t dressed up for no reason you see,
they were raising funds for Frank Sarris Public Library.

They brought in their coins in a bag or a box,
and some even used their lucky red socks!

When the week was done and the coins all collected,
the end result was much more than expected.

Which just goes to show, a great lesson for all:
“A donor’s a donor, no matter how small!”

The 740 students of Muse Elementary participated in “Coins for a Cause” during their Dr. Seuss Week, when colorful costumes of beloved characters added to the excitement of the donation drive. Principals Tula Dziak and Tom Theodore hoped to raise $1,000 for Frank Sarris Public Library, but they were worried about reaching that goal when a school cancellation confined fundraising efforts only four days. However, once they’d finished counting, the principals’ fears were unfounded. The students had raised $3,187.52!

“They’re just amazing. We always talk about doing the little things. This is a great example of how anyone can make a difference,” stated Principal Dziak. “We teach kids about giving but, with the library in their community, it’s a tangible example of how their money helped their library.”

The staff of Frank Sarris Public Library were proud to serve as a hub for social engagement, as many of the school’s students attend the library’s children’s programming. The library plans to use the funds to purchase new materials for their patrons.

“I was shocked,” said Library Director Peggy Tseng. “It’s a classic example of a grassroots effort, of how any one of any age can help.”