To aide and assist the blind; promote training, employment, education and rehabilitation of the blind; to supervise, standardize and market blind-made products; and to prevent unnecessary blindness.

To aide and assist the blind; promote training, employment, education and rehabilitation of the blind; to supervise, standardize and market blind-made products; and to prevent unnecessary blindness.

With Vision Impairment, Comes a "Vision" of Talents 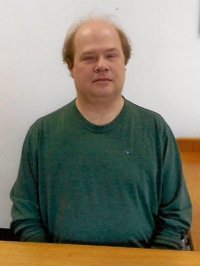 For many years, Keith Aylsworth was a self-sufficient Information Technology professional working in both Computer Operations and Helpdesk environments. But after his vision deteriorated and he was left legally blind, he found himself turning to others for support.

In the early 1990s, Keith Aylsworth was living and working outside of Pittsburgh, PA. He earned a Bachelor of Science Degree in Business Administration with a major in Management Information Systems from Indiana University of PA. An avid reader, Keith had a successful career, working for Legent Corporation and then Affiliated Computer Services, formerly Genix Corporation. In 1998, Keith became a Data Security Specialist. His career was growing.

In 2009, Keith noticed that his sight was deteriorating and he sought out ophthalmologists' help. He was diagnosed with Glaucoma, which may damage the eye's optic nerve and can result in vision loss and blindness, and Cataracts, the clouding of the eye's lens that causes loss of vision, in each eye. Keith had treatment and surgeries for these eye diseases and initially there was some improvement, but complications developed which left him legally blind.

As a self-sufficient and talented professional, Keith's independence diminished, and he realized he had to become more dependent on family, friends, and especially on his long-term companion, Sue. No longer able to drive, transportation for Keith was becoming a problem. On a few occasions, Keith's parents had to get up as early as 4 a.m. to drive from their home in Meadville, PA, where Keith grew up, to Keith's home in Washington County to help transport him to doctor's appointments.

The Washington-Greene County Blind Association (WGCBA) is now assisting Keith in many ways and has contributed greatly to his acceptance of the growing deterioration of his eyesight. "The transportation which WGCBA provides has taken the pressure off of my family, friends, and Sue," remarked Keith. The various WGCBA's Support Group's Meetings, Socials, Field Trips and other supportive activities have also provided Keith with much needed support.

In an effort to both pay back the WGCBA for all of the help and support he has received and pay it forward, Keith has hopes of creating an USER Group for the visually impaired and the blind. The group would provide a forum for people to discuss the technology they use in their daily lives as well as offer assistance with personal computers, smart phones, tablets, and digital assistants such as Google Home or Amazon Alexa. It is Keith's hope that the group will help people find answers and get people to resources that can help with their problems. The group would also enlighten people as to how the ever expanding array of technology options may aid them in their daily lives. This opportunity would provide an outlet for those who are visually impaired or blind to support each other in their growth through both technology and human interaction.

What Keith Aylsworth, a Washington-Greene County Blind Association member, is lacking in sight, he is growing in a "vision" of sharing his talents with others.