The Gift of Grace 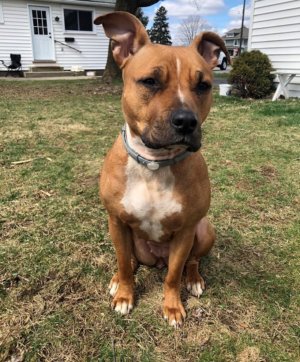 The crate was hot and cramped. Gracie, a tan dog with a white chest and white toes, huddled unhappily inside. Occasionally, the sound of footsteps outside made her head perk up with hope – maybe she would be let out of the crate, or at least fed and given some water. But Gracie was ignored, and she began to grow weak.

Fortunately, the Washington Area Humane Society received a report about Gracie. She was found behind her owner’s house, locked in the crate, and nearly dead from dehydration and starvation.

After her rescue, Gracie was taken to Pittsburgh Veterinarian Specialty and Emergency Center to receive medical attention, which included IV fluids, blood panels, and other tests to make sure she was stable. Then, she was transferred to the Washington Area Humane Society, where she immediately won the hearts of the staff and volunteers with her sweet disposition.

When Gracie entered the shelter, she weighed only 33 pounds. Other dogs like Gracie should weigh almost twice as much! She had a long way to go. The WAHS vet team put her on a restricted diet and daily fluids. She also received a microchip, vaccinations, flea treatment, and antibiotics to help rebuild her health.

In time, Gracie was placed with a foster family. With all the comforts of a loving home, Gracie began to put on weight and soon reached her goal of 55 pounds. Then, Gracie was spayed and readied for adoption. Today Gracie is healthy and lives happily with her loving parents and dog brother. She goes on long walks and loves the sunshine. Her new owners say Gracie is their best friend and is the most loving dog imaginable. Gracie’s story is a lesson in the gift of grace: patience, blessings, gratitude, gentleness, and love.