Celebrated were the “Rosie the Riveters” of the Greatest Generation who worked to keep the home fires burning while men fought on the front lines. But many may not be aware that during World War II there were also women from small towns all across the county who volunteered to serve overseas alongside soldiers in most extraordinary ways. And their stories deserve to be told.

It was a fall afternoon when two California University of Pennsylvania Honors English students arrived at the Monongahela Area Historical Society Museum.

They were there to engage in digital storytelling, an important facet of their coursework at California University of Pennsylvania.

At the museum, they interviewed Historical Society volunteers and studied the museum holdings, learning history through primary sources.

While conducting their research, the students became captivated by the stories of two local women who served in World War II: Dr. Josephine Stephens and Dr. Sarah (Sally) Stephenson.

In 1943, Dr. Josephine Stevens, a pediatrician and surgeon, joined the Emergency Medical Service of the British Red Cross. Ascending through the ranks, Dr. Stevens moved throughout various hospitals across Brittan before being commissioned as a Captain for the General Dispensary in London.

Enlisting that very same year was Dr. Sarah Stephenson, who joined the WAVES (Women Accepted for Volunteer Emergency Services), a unit of the U.S. Naval Reserve. With no experience of flying a plane, Dr. Stephenson was charged with training new pilots for nearly three years.

The resulting project, Women of War Time, is a fascinating look into two women who helped to play a part in making history. 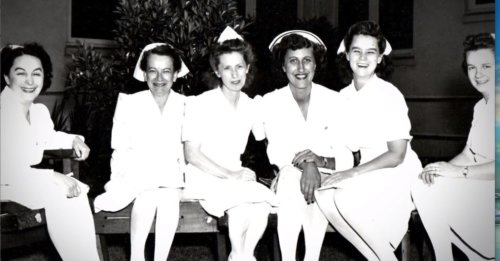