31   people have liked this story. 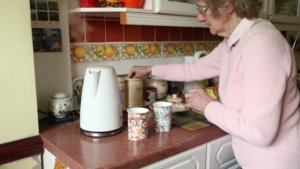 The sun had just begun to peak through the blind on her bedroom window. Janice rolled over. Sleep still eluded her since the death of her husband Michael eight months ago. She had shared this room and this home with him for over 40 years . . . she knew it would take some time to get used to not having him there. Knowing that didn't make the pain any less nor did it take away the fact that there were still bills to pay.

Her neighbors would be here soon to drop off their little boy for a few hours. Janice watched the little boy each week in exchange for her neighbor cutting the grass. Jake was a sweet little boy, but at 72 Janice didn't have quite the amount of energy that she did twenty years ago.

She got dressed and made her way to the kitchen. As she poured herself a small bowl of cereal she was grateful that her neighbor suggested that Janice go to the Beth Center Food Pantry each month. She resisted at first. Janice never had to ask for help from anyone. Michael worked construction his whole life and even though there were lean times they were always able to get through. She smiled when she thought of the large batches of vegetable soup simmering on the stove. Each month the two of them would make the soup and take it to their church to feed the hungry. Now, with Michael and his income gone, she herself was in need of some help. The box of food that she got each month was just the right amount of food to help her. She couldn't bear to think of the struggles she would have without it. Having that box of food provided by the Greater Washington County Food Bank meant a little less worry. Michael was still gone but she would carry on just as she knew he would want her to do.