37   people have liked this story. 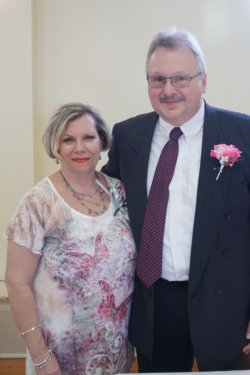 Melvin Krek had been in UPMC Shadyside Hospital for over a month. He was undergoing intensive chemotherapy for leukemia and didn’t have much to do. To keep his mind occupied, he’d often listen to the local radio station WJPA. When he heard an ad for the Washington Symphony Orchestra, Melvin’s interest piqued.

“I remember thinking how cool it was to have an orchestra in a small town like Washington,” Melvin reflected. He kept the thought of seeing the orchestra in the back of his mind throughout the rest of his treatment. When he was pronounced leukemia-free and with a new lease on life, Melvin announced to his wife Diane that they would be going to see the WSO that Saturday night.

Diane was surprised because previously, Melvin had showed no interest in classical music. Jokingly, Melvin replied that there must have been some “culture” in all of the blood transfusions that he had received.

That concert was the first of many, and in the months to come, Melvin drew strength from the WSO’s music, just as he had while he had been in the hospital.

As if the Kreks had not faced enough challenges, Diane was losing her vision. They joined the Washington County Chapter of the PA Council of the Blind for support. In an effort to give back to the community and share the music that had helped him, Melvin wanted to help others in the group. He found a grant program funded by Washington Financial that allows under-served individuals to attend WSO concerts free of charge.

“Some of these people have been blind since birth and have very minimal disability insurance,” said Melvin. “Many opportunities to go out are often cost-prohibitive for them.”

Soon, Melvin was able to share his joy with an entirely new audience. He was hopeful the experience would help them as it helped him. “Everyone was so pumped up on the drive home, they couldn’t stop talking about it,” Melvin explained. “It’s said when you lose one of the senses, the rest of them pick up and improve. They could hear every sound and could identify each instrument. I’m just so happy I could share it with them and get them into it.”

Melvin was clearly onto something, as members of that group are now some of the WSO’s most loyal patrons.