To provide equipment, supplies, planning and training to animal response teams in Pennsylvania to respond in the event of an emergency or act of terrorism.

To provide equipment, supplies, planning and training to animal response teams in Pennsylvania to respond in the event of an emergency or act of terrorism.

23   people have liked this story. 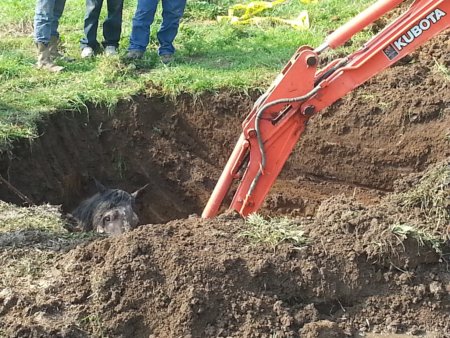 Danny didn't have much time. The water was rising on the sinkhole he had fallen into and if he did not get out, he would drown. As the water rushed in, he struggled to climb out, but the crumbling walls would not allow him to escape. If someone could not get Danny out, he could die.

Danny was a horse. You can't just throw a rope to a two thousand-pound horse and tell him to hang on.

Melissa Dyer, one of Danny's owners, was panicked. How on earth could they get her beloved horse to safety? Who do you call? The police? The fire department?

The Avella Fire Department did respond, and pumped water out of the hole, giving Danny precious time. The Fire Department knew who to turn to to rescue a large animal: the Washington County Animal Response Team (WaCART). By the time they arrived on the scene, Danny had been in the hole nearly twenty-four hours.

Located within the North Strabane Fire Department, this local division of a state-wide first responder organization, Pennsylvania State Animal Response team (PaSART), provides equipment, supplies, planning, and training to animal response teams to respond to an emergency or an act of terrorism.

"In emergency situations, we focus on the animals, so other first responders can focus on their jobs," said Ed Childers, coordinator for WaCART.

They came up with a plan. Excavate a larger hole, and create a path into the trench.

Danny's owners, the Dryer family, had the equipment to do the excavation.

"We made a road to pull the horse out," Childers explained.

"It took us about four hours to get the horse out," Childers said.

Responders from WaCART, the Avella Fire Department, Washington County Department of Public Safety, and other first responder organizations assisted with the horse's rescue, as well as a volunteer veterinarian.

Melissa Dryer said she was impressed with the team's performance.

"The drive and dedication of the WaCART team was what led to this successful operation," Dryer said. "It truly was impressive."