Preserve and interpret the history and technology of street railways in Pennsylvania.

Preserve and interpret the history and technology of street railways in Pennsylvania. 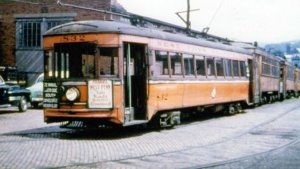 Miss Brackenridge had seen it all.

In her prime, she was the pride of Allegheny Valley. She would ride up and down from Aspinwall to New Kensington, Tarentum, Natrona and everywhere between as folks admired her beautiful trappings and stunning curves.

But times had changed. The current generation had all but forgotten her, thinking her too old-fashioned.  After only seven years of use, she was transferred to another division.  Her trolley line was paved over to make way for a wider road. She was a streetcar without a street!

In 1952, Miss Brackenridge sat abandoned in the back of a car barn waiting for the scrapper’s torch. She was rescued at the eleventh hour by a group of trolley enthusiasts who moved her to another car barn in Charleroi. From there, she was sent to the West End of Pittsburgh. Kids were delighted to see her on the streets. One little boy named John waited for her to come by so he could catch a ride to her new home in Washington County.

Miss Brackenridge’s final destination was the Pennsylvania Trolley Museum. But her floors were rotted and her undercarriage rusted. Everything groaned and strained. In her current state, she would never be able to ride down the tracks again. 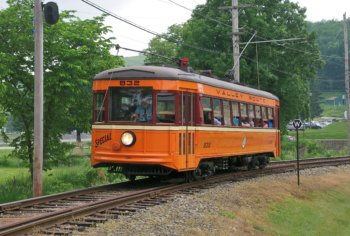 In 2010, Miss Brackenridge would begin a journey to restore her former glory. Thanks to the generosity of many funders and the hard work of countless volunteers, she was completely overhauled with new wiring, air piping, flooring, upholstery, undercarriages and traction motors.

On June 1, 2018, Miss Brackenridge proudly rode down the tracks once more, with a large crowd cheering her on and excitedly waiting for a ride. And at her helm was none other than John Swindler who, as a little boy, caught a ride on her final trip to Washington County.