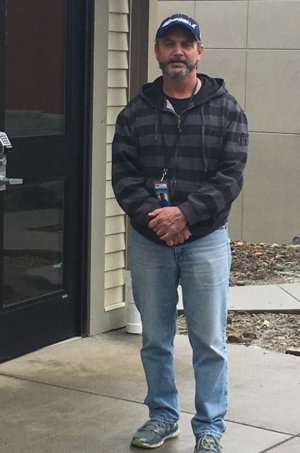 Jeff, a veteran, belonged to the Army Reserves for 18 years. During his enlistment, he trained for many wartime situations and was prepared to serve whenever he was needed.

However, what he could not prepare for was the course his life would take.

When Jeff came to the City Mission, he was severely depressed and malnourished.

“I was as broken as someone can be,” he remarked.

For his first few weeks in the Men’s Program, Jeff was required to only eat, rest, and heal. His journey took time. As he regained his strength, Jeff entered the Work Therapy Program. It was not long before Jeff requested placement at the Distribution Center Warehouse. He felt comfortable there, operating some of the heavy equipment and performing work in which he was skilled. His confidence grew, along with his faith.

After graduating from the Men’s Program in November 2016, Jeff was hired to work in the Mission’s Maintenance Department. Being employed in a Christ-centered organization has helped him to stay close to God: “Through God all things are possible . . . the City Mission saved my life.”

Inspired by the support he has received, Jeff recently assumed the role of Residential Assistant at the Patriot House, the City Mission’s residential shelter dedicated to serving homeless veterans.

He has empathy for other vets, particularly those who are trying to numb the emotional pain they are feeling by self-medicating. In his work as a Residential Assistant, he will serve his fellow veterans in any way he can to help them heal. “It’s a form of brotherhood, a military brotherhood. War vets need to talk with other war vets.” With a renewed sense of purpose, Jeff is excited about the future and sees his work at the Patriot House as another new beginning.