65   people have liked this story. 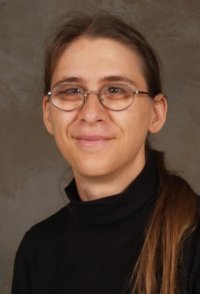 Melissa Collins had her first cataract surgery at three months of age.

Melissa was born with cataracts and glaucoma. Now in her 30's, she has been legally blind her entire life. But that, along with a list of other disabilities, doesn't stop or even slow this music lover down.

Back in the fall of 2005, she was a student at California University of Pennsylvania with a double major in secondary education-speech communication and psychology. She also performed with the string ensemble under the direction of Esther Wagner-Yuan.

"One day, Dr. (Yugo) Ikach came in to practice and asked us to join the Washington Symphony Orchestra," Melissa says. "Over half of us joined."

Since then, Melissa has been playing the violin and cello with the WSO. She practices for a couple of hours almost every day. "I've played violin since the 1980's but didn't have private lessons until college," she says. "I had developed a lot of bad habits that were hard to overcome. If you practice with bad habits, you'll do it badly. Practice it well." Her motto is "Practice makes permanent."

Melissa loves being involved with the WSO because "we don't limit ourselves—we play a variety of different types of music—some more difficult than others, and that's good. Some of the music I don't know well, but end up liking. The people are really nice, too."

Staying busy is important to Melissa. "I try to be a productive member of society," she says. "I would get bored just sitting in the house." Her longtime boyfriend and driver, Wil Henry, agrees. "Her life is pretty much music," he says. "Since she's been around music and the WSO, she has branched out a lot and gotten to know many people."

Wil and Melissa met at Cal U, where both were involved with the band and with Kappa Kappa Psi, the honorary band service fraternity. He double-majored in Physics and Electrical Engineering Technology and is a teacher at PA Cyber School. In addition to driving Melissa to rehearsals and concerts, he also volunteers with the WSO, helping with set-ups and tear-downs.

Dr. Yugo Sava Ikach, Principal Conductor and Music Director of the WSO and Co-Chair of the Department of Music and Theatre at Cal U, has worked with Melissa since 2005. "Melissa Collins, like every other WSO member, does whatever is needed to be prepared for rehearsals and performances," he says. "She arranges her schedule to allow for time to practice her part throughout the week on her own time and for weekly full orchestra rehearsals." In fact, Dr. Ikach has to remind himself that she is legally blind. "I just see her as Melissa, dedicated cellist with the WSO," he says.

In addition to the cello and violin, Melissa also plays the flute, piccolo, and clarinet. "Musical instruments are like potato chips," she quips. "You can't have just one."