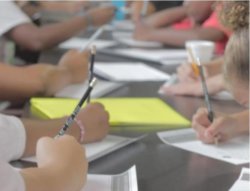 When the children told her that the definition of the word “fierce” was Beyoncé (as in the international pop music superstar), Joyce Ellis knew that it was time to take her kids to the Hit Parade.

If knowledge is power, there is no better way to empower today’s youth than to teach them the art of communication.

As Executive Director of the LeMoyne Community Center, Ms. Ellis is always looking for creative educational opportunities for the underprivileged participants of Camp Challenge.  After realizing that not only did her children have limited vocabularies but they were struggling to understand the true definitions of words they do know, she had an idea.  The result was Power Words.

Power Words was developed using a three-step process to maximize retention: learn it, write or draw it, then use it in a sentence.  The featured words are drawn from SAT and ACT vocabulary lists (sometimes referred to as the “Hit Parade”). 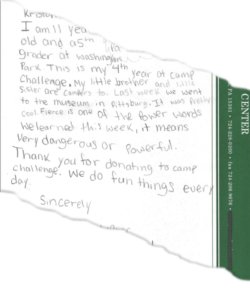 And it’s not only the older children who are charged with building their vocabularies.  Even the kindergartners are developing their minds through their exposure to these words.

To complement the Power Words lessons, Ms. Ellis has the children write thank you notes to supporters using their vocabulary bank.  Those in fourth grade and older actually write the notes in cursive.

“The kids have beautiful penmanship because they’re taking the time to develop it,” remarked Ms. Ellis.

Sometimes, the recipients of these messages have been so impressed, they will write back to the children.  One note stated, “Words such as ‘novice,’ ‘benevolent,’ and ‘mundane’ are not always easy to use.  Keep up the good work!”

Yes, Beyoncé is fierce, and now the Camp Challenge kids know why.