23   people have liked this story.

These twenty-first century kids didn’t know a thing about the Edsel, The Blob, or dancing the “Mashed Potato,” but when audition time came, they were ready to sing their hearts out.

During its summer season, the Washington Community Theatre, or WCT, often has a number of children in its ensemble cast. However, when the group decided to perform the musical Urinetown (which is not particularly suited for young actors), they did not want to turn away any aspiring stars. The solution? WCT Kidz – a kids’ theatre program that is unique to Washington County. 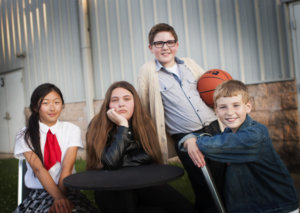 WCT Kidz provides young people, ages 7 to 15, with a chance to tread the boards in an all-child theatrical production. The participants learn basic acting techniques while building their self-esteem and comfort level on stage.

The group’s inaugural season was kicked off by The Nifty Fifties, a musical comedy tribute to the 1950s that is set in a diner. After auditions were complete, the cast included both WCT veterans and children who had never been in a show. Part of the fun for the adults involved was teaching the 42 participants all about the many pop culture references in the show. Although The Nifty Fifties was written specifically for children, that doesn’t mean that the songs are easy.

“The music is tough with three, four, and five-part harmonies . . . It was absolutely incredible to watch them give it their all and shine on stage,” remarked Summerlea Klinar, President of the WTC.

This summer will offer the WCT Kidz an exciting glimpse into the psychedelic 60s with the show Groovy. So far, the children have really enjoyed learning how to make a peace sign. Far out!