To affirm liberty and justice for all people with disabilities.

To affirm liberty and justice for all people with disabilities. 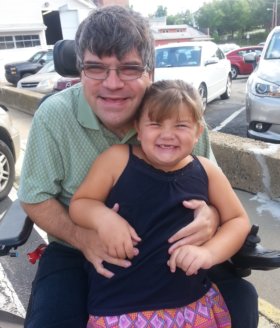 I was born with cerebral palsy, so my family believed that my future was limited.  As a child, they told me: “You will be lucky to get a job at McDonald’s” and “You will never drive a car, never buy a house, and never be a Dad.”

I had a normal childhood.  I was a Bentworth School District honor student, participating in both Future Business Leaders of America and Junior Achievement.  I just used a walker or wheelchair to get around.

Then in 1996, I was invited to a meeting at TRPIL (Transitional Paths to Independent Living).  At the time, I had never heard of TRPIL.  However, I soon learned more about this group of people with disabilities working together to improve services and accessibility within our community.  So, I became involved.  Then, I was nominated to be on the board of directors.  Nine months later, I was hired for a temporary position as an Independent Living Specialist.

TRPIL changed my life.  Not just because it provided me with a job and a paycheck, but because it gave me access to information.  With TRPIL, I learned how to drive a car with hand controls and manage my resources.  And in 2009, all of my dreams became reality:  I purchased a home and finally became a proud Dad of two girls and one boy – dramatically changing my life for the better.

Thanks to TRPIL, I have been helping others with disabilities take control of their lives and reach their own goals.  My involvement for the past 21 years has given me many opportunities to live my life to the fullest.

Goals are not just about paychecks, monetary gains, or material positions.  I want to teach people the true meaning of “independent living” by sharing my story.