Music Has No Limits

26   people have liked this story. 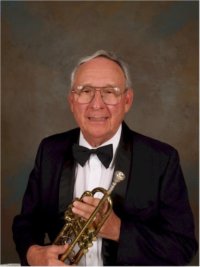 At 88 years young, Paul Weber is the WSO’s oldest volunteer. Sitting in the trumpet section where the next oldest volunteer is less than half his age, Paul brings a wealth of musical and life experience with him to each rehearsal that he can share with his younger counterparts.

“I do it to keep active,” said Paul. “I just keep playing—it’s something to look forward to.”

Paul not only volunteers at the WSO season concerts, he can be seen at summer events and playing holiday music with the WSO Brass Quintet as well.

Paul has been volunteering with the WSO for a majority of the 18 seasons it has been around, after he was invited to play by Founding Director Dave Owens, but his community musical roots run much deeper than that.

Paul played trumpet with the Pittsburgh Civic Orchestra for half a century before he came to the WSO. He first picked a trumpet at the age of 10 after watching his hometown hero, Benny Benack from Clairton, excel at the instrument. Paul also played with the Shrine Band in Pittsburgh for 20 years.

Music was Paul’s “day job” his entire life as well. He taught in the Washington School District and in Moon Township until he retired in 1989.

In addition to volunteering with the WSO, Paul also plays trumpet with the W&J Jazz Ensemble. He is the Founding Director of the Thursday Morning Brass in Chautauqua, a 10-member double brass quintet.

Paul’s wife Ann has an indirect, but nonetheless significant, impact on the WSO over the years as well. As a long-time piano teacher in Washington, Ann has touched the lives of countless students, several of which have competed in our Young Artist Competition, and won, including the 2019-2020 winner, Trinity High School senior pianist Nancy Xiao.

The Webers have touched the lives of young, local musicians over the years and they continue to do so when Paul volunteers with the WSO, ensuring that our community has an outlet where talented musicians can express themselves and eager audience members can be educated, entertained and inspired by those talents.