Our mission is to provide horseback riding activities to children and adults with physical, mental and emotional disabilities.

Our mission is to provide horseback riding activities to children and adults with physical, mental and emotional disabilities.

16   people have liked this story. 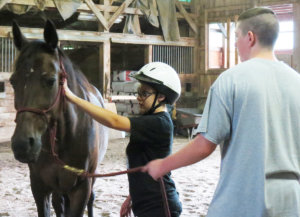 "Make hay while the sun shines" is a familiar expression with an important message for all of us (not just members of the agricultural community). Taking advantage of opportunities when they present themselves can be critical to success.

Perhaps with this saying in mind , In-Stride with Therapeutic Riding, a local charity that provides horseback riding to children and adults with disabilities, recognized WCCF Gives as an excellent way to raise funds to feed their noble beasts during a critical point in the year.

Much of In-Stride's revenue is derived from its student lessons, which primarily take place between March and November. Since the horses require year-round care, the decrease in program income during the winter months places a considerable strain on the organization's finances during that window.

In the weeks prior to WCCF Gives, members of the In-Stride team calculated the various costs associated with running their programs. They ultimately decided to focus their WCCF Gives campaign on raising money to feed the horses. For instance, one bale of hay costs $4.25, and In-Stride uses 6 bales of hay daily. Therefore, with a gift of just $25.50, a donor has the opportunity to feed the horses for a day! By demonstrating how a modest gift has the ability to make an impact, In-Stride inspired many individuals to support them during the day of giving.

"As we saw our real-time donations on the WCCF Gives website, we calculated how much hay we could buy with that amount and shared the information on Facebook and Twitter," remarked Dana Flaherty, In-Stride Director.

In-Stride raised a total of $998 through WCCF Gives. Adding their portion of the bonus pool to those donations brought this charity's Gives grant total to $1,368, which was enough to purchase two months of winter hay.

Not only did In-Stride walk away from WCCF Gives 2013 with a grant, but now the charity has a proven fundraising strategy that can be implemented again this year!