88   people have liked this story. 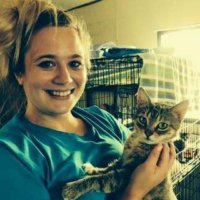 Cat lover Jami Hilderhoff considers the time she spends at Angel Ridge Animal Rescue in Washington, Pennsylvania, a blessing, not a duty.

Her involvement began a few years ago.

After seeing a request for donations on Facebook, Jami decided to purchase some kitten supplies. While delivering her donations to Angel Ridge, she learned from a volunteer that help with the cats was needed.

Now, when she’s not at her full-time customer service job, she looks forward to volunteering at Angel Ridge once or twice a week.

“It never feels like work.  I love it here,” she said.

During her earliest days at Angel Ridge, Jami was especially drawn to a group of four sister kittens who had been found in a wall of an abandoned house.

“The kittens were timid and difficult to care for at first, so I spent a lot of time with them,” she explained.  Her dedication to those cats continued even after they found new homes.  In fact, Jami conducted follow-up visits with the adopting family of one the kittens.

Amy Shuster, a fellow volunteer, considers Jami a joy to work with because she is professional and loves the cats very much.  So much so, Jami ultimately adopted a cat named Pumpkin from the shelter.

Late one night, Jami received a phone call alerting her of a possible fire at Angel Ridge.  She and her fiancé, a firefighter, rushed to the shelter.  Thankfully, it was only a false alarm.

“I didn’t even think.  We jumped up out of bed and took off,” she says.  “I was so relieved that nothing was wrong.”

It’s not only the cats that keep her coming back.  Jami says that she and the other volunteers have become very close.  “One of them is throwing me a wedding shower,” she said warmly.

Admittedly, Jami was surprised it took her as long as it did to start volunteering at a shelter like Angel Ridge.  In fact, it was her childhood dream to be a “puppy doctor.”

“I’m right where I want to be.  Coming to Angel Ridge is like coming home.”