Bentleyville Library provides service to over 9,500 borrowers of books and computer access.

Bentleyville Library provides service to over 9,500 borrowers of books and computer access.

12   people have liked this story. 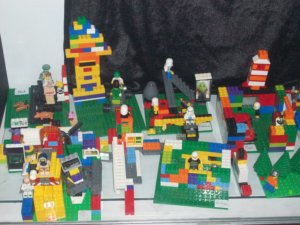 The children who attend the Bentleyville Public Library's LEGO Club stand excitedly beside buckets filled with LEGOs, waiting for the signal to begin; hands at the ready.

That's the excitement they feel for LEGO Club. Charlotte Carpenter; the acting director of the library, sets her phone alarm for 10 minutes as the children start to build.

"We give the kids 10 minutes to build, and then they have to tell us what it is that they've built," Carpenter said.

On a recent meeting of the club, among the creations built by the eight children in attendance are cars, a whale, and a scrap yard, among other objects. Afterwards, they moved on to the next step.

"They get pieces of paper with ideas, and they build that idea however they'd like," said Carpenter. "We do have to change up what we give them, otherwise they get bored."

As they build, the children talk to one another, sharing LEGOs that they find but don't need with each other in return for pieces that they could use.

After the children build the idea from the paper, they are given the last 30 minutes to build their "masterpiece" which is placed in a glass case and put on display in the library until the next meeting, as well as having pictures posted to the library's Facebook page.

Local parent John Chrobak, who was at the library with his son Josiah, enjoys that the library has events for the children, and shared what makes it enjoyable for him.

"It's the ability to see the minds of children at work," Chrobak said. "There's a good social aspect that goes with it as well."

Once the children have finished building their masterpiece for the event, Carpenter gives them a trivia lesson at the end of the session.

"We give them a trivia game at the end," Carpenter said. "So far, they've done a pretty good job at retaining the things we've talked about."

As the event ends and the kids say goodbye to the staff, Carpenter laughs as she reveals what she thinks is the biggest motivation for the kids that come to build LEGOs on these nights.

"I think that these kids just love to hear the sound of their hands running through the LEGOs," said Carpenter smiling.