Genesis of Pittsburgh, Inc. provides counseling and support services to women facing the problems of an unplanned pregnancy. Many women find they are able to carry their unborn children to birth with the encouragement and practical assistance provided by Genesis.

Genesis of Pittsburgh, Inc. provides counseling and support services to women facing the problems of an unplanned pregnancy. Many women find they are able to carry their unborn children to birth with the encouragement and practical assistance provided by Genesis.

71   people have liked this story. 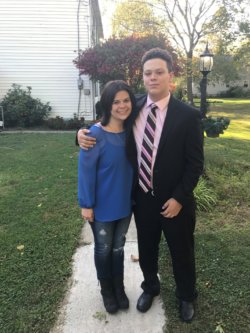 I was 23 years old with no college education, a substance abuse history, homeless due to family strains, and a single mother of a 4-year-old when I realized I was pregnant. I was in an abusive relationship and did not have a dime to my name. I was scared.

My parents, who were raising my son in my absence, had given me a few days to stay at their house until I figured out a plan. I searched and found Genesis of Pittsburgh. I was hopeful when I read that they had a house for pregnant women who were homeless. I called, made an appointment to meet with the director and moved into Genesis House that day.

Through their program I went to regular doctor appointments and counseling. I made the decision to place my child for adoption. I knew that I was in no shape to raise another child when I couldn’t raise the one that I already had.

When my son was born, I spent time alone with him and my decision to place him for adoption was never clearer. In his sweet, beautiful face, I saw a little boy that I could not provide for and who deserved so much more than I was able to give him at that time in my life.

When the adoptive family came to the hospital I felt confident that I had chosen the perfect family for him, at ease because I could tell that they already loved him, and connected to this woman who I didn’t really know because of what I did know - she would be the mother to my son and love him unconditionally as her own, the man sitting in front of me would protect my little boy with his life and teach him so many things about life and being a man, and grateful for the little girl that he would have a sibling bond with.

While living at Genesis House I was able to rebuild my relationships with my parents and my other son. When I left, I went home to my family, graduated with a Master of Arts degree in Counseling and started my career.

Twelve years after I left the Genesis House, I received a heartwarming message from my son’s mother. Through our conversation, I mentioned that I had always wanted to contact Genesis to volunteer. She told me that she was sure they would love to have me help. A few months later, I received a phone call from Genesis asking if I would be willing to do a short video for national adoption month which I was more than happy to do. Not long after, Genesis invited me to be a part of their Board of Directors.

Since starting to volunteer, I have been involved as much as possible. I promote Genesis and their programs at every opportunity. I bake cookies for the Genesis House resident’s holiday party and buy toys for the toy drives. I attend and help organize events including the retirement party for the previous executive director, for which I created a photo montage to play during the party that included photos and “well wishes” from families whose lives she had touched like mine. I have also volunteered as a counselor if ever needed.

Finding Genesis was a blessing. They were there when I needed someone the most. They have been supportive and have shared in my many joys in life. I am grateful for the staff and for all of the volunteers and board members who go above and beyond. I am grateful for the relationship that I have with my son’s parents. I owe a lot to Genesis. The only way that I can think of ever being able to repay them is to continue to volunteer. So as long as I am giving back and helping others, I hope and pray that I can make an impact on another woman’s journey.