19   people have liked this story. 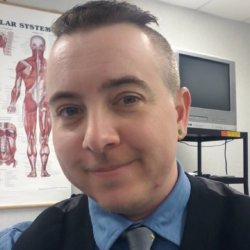 Public speaking is a common cause of fear and anxiety for a lot of people, including Jaden Rearhys, a member of the board of directors of Washington County Gay Straight Alliance Inc. But when asked to tell his story at a community event, he decided he needed to put his anxiety aside.

"The message was more important than the fear," said Jaden.

Jaden, 35, who self-identifies as being gender fluid, was asked to speak last November during WCGSA Inc.'s annual Transgender Day of Remembrance and Candlelight Walk.

"I was so nervous beforehand because I haven't had a lot of experience with public speaking, But I was so honored to be asked, and it turned out to be a great experience," he said. "Just to be heard and to have people there that really care about what people in the transgender community are going through was amazing."

Jaden said an event like the Transgender Day of Remembrance can be a somber affair. "I think a lot of people think it's going to be like going to a funeral. It can be sad, but I wanted to speak from a place that is uplifting and provide words of support, encouragement and help people learn."

Jaden, a native of Verona, moved to town three years ago to live in a residential recovery community. Since his arrival in Washington, he has been able to continue his education and currently works as a licensed massage therapist. Jaden said he began attending the monthly 2 nd Friday Night Potluck hosted by WCGSA Inc. which is a social gathering for LGBT people and allies.

"It feels like a family dinner, and I found a community of support," said Jaden. Jaden credits being involved with WCGSA Inc. for helping him continue in his recovery and grow up. "Becoming a member of the board of directors of the organization is a huge thing for me, and I am grateful to be able to have a place to do work that could help bring peace to the world and build bridges between people," he said.

Jaden said the weekly support group for LGBT teens and allies is what he feels is the most important work of the organization. It's so important for youth to have a place to go where they feel love and acceptance, he said. "If I had a group like that when I was growing up, I probably wouldn't have been such a loner and maybe wouldn't have even gotten involved with drugs. It would have been a better place for me to learn about sexuality and gender identity than a bar."