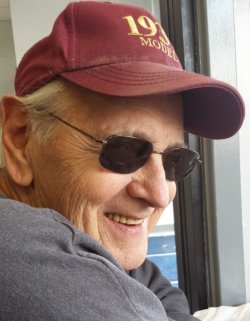 Norm Randa had never felt anything was wrong. He had been working for the past eight years driving a school bus. When he wasn't working, he spent time with his family and friends, and he took care of his wife who was diagnosed with lung cancer and neuropathy in 2011. She needed help with her daily life, but he still managed to find time for everything.

That all changed last year when Randa was diagnosed with lung cancer. He had gone to the doctor for an arthritis screening and the nurse had noticed something was wrong. The x-ray showed a tumor on his lung, something that Randa had never expected.

Due to the lung cancer and treatment, he soon retired from his job and had to limit the amount of time he could spend with his friends. Even with these ups and downs in his life, one thing has remained constant for him, his attitude.

"It's all good," Randa said. "This hasn't changed a lot for me. I still can generally do what I like. I like to see the lighter side of life."

An experimental treatment was recommended that would allow Randa to progress in his recovery. He was denied initially, but eventually was approved. It was a long and difficult process.

"I wasn't worried when I got denied at first," Randa said. "I just kept living my life to the fullest with a glass half full view of life."

The American Cancer Society (ACS) has provided some of the resources both Randa and his wife need to cope with lung cancer. The ACS helped the Randas find out where to get chemotherapy treatments and helped him to stay healthy with exercises after treatment. Randa also went to a support group when he was initially denied for the experimental treatment.

Randa now uses an oxygen tank to help him breathe and carries it around with him wherever he goes. He gets out when he can, although a little less than he could before. For him though, it doesn't change his outlook on life.

"You can't take life too seriously," Randa said. "As long as I'm able to be with my family and my wife is by my side, my life is perfect. It's all good."