1   person has liked this story. 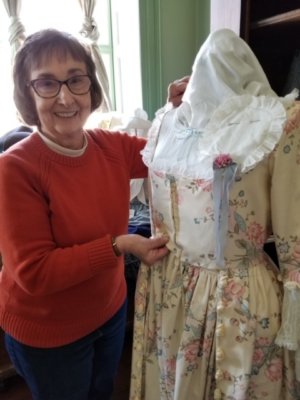 As Paula Anderson surveyed the dozens of coats, dresses, undergarments, and sundry waiting to be cataloged, she realized it was going to be a daunting task. Who could assist her with this job?

Paula had been volunteering at the David Bradford House since she retired from teaching in 2009. Over the years, she’d done everything from giving tours to helping in the office.  Now, she had the important responsibility of maintaining and cataloging the House’s period clothing collection. These special garments help to impart authenticity when telling David Bradford’s story, as the Whiskey Rebellion shaped American History. So, she needed someone special to help with this task.

There was a time when Emily Richard, a high-school freshman, had only seen a petticoat in the movies. But after becoming a Bradford House volunteer, she often wore one as part of her period attire for tours and events. Call it teacher’s instinct, but Paula sensed that Emily would be excited to learn more about the garments, so she recruited her for the cataloging project.

“I see a little bit of myself in Emily, especially since we both share a love of history. Through our conversation, I gained a new appreciation for how teenagers approach volunteerism and service. I’m very proud of her dedication to the Bradford House,” Paula remarked.

During the summer, Emily, now a University of Pittsburgh student, will assume the prestigious role of David Bradford’s wife, Elizabeth, during the 18th century living camp for children.

She commented, “I have been so inspired by Paula’s passion for keeping David Bradford’s story alive, and I want to continue to have a role in preserving this piece of our local heritage.”

And perhaps Emily’s performance will spark an interest in a member of the audience – someone who may one day become a volunteer at the David Bradford House.