95   people have liked this story. 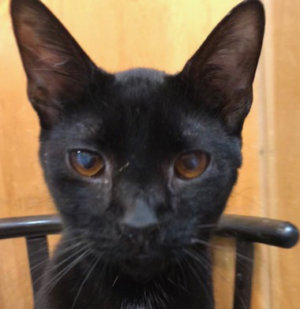 The phone call came very early in the morning.

An employee of Tractor Supply called Pet Search after a kitten was discovered crying pitifully underneath a dumpster behind the store.

After a few “here, kitty kittys,” a small black cat stumbled out from under the dumpster. Without hesitation, the animal ran to the man who had been calling him.

The man lifted the kitten to his face and immediately realized there was a problem. The kitten’s eyes were completely inflamed. As a result, the pitiful animal had lost its sight.

Within a few minutes, representatives from Pet Search arrived to help. They rushed the 10-week-old kitten to a local veterinarian.

The diagnosis was horrifying. The veterinarian believed that some type of caustic chemical had caused the eye inflammation. Abuse was suspected. Furthermore, the tiny kitten, who came to be known as Oreo, had also contracted pneumonia. Not only was he fighting for his eyesight, but he was also fighting for his life!

Administering medication to battle the pneumonia was a priority. Oreo was on intravenous antibiotics and oxygen for over a week.

Once Oreo began to recover from the pneumonia, saving his eyes became the focus.

When Oreo was released to Pet Search, it was necessary for him to receive multiple drops, salves, and washes for his eyes. Each one was administered in hopes he might recover some of his sight. Only time would tell.

Pet Search connected Oreo with loving foster parents who dutifully provided care every four hours. They could not be sure if progress was being made, but they continued the routine with optimism.

One morning about a month after Oreo’s rescue, his foster mom noticed something was different. She closely inspected his eyes. Incredibly, his pupils were visible!

With continued medical care and lots of love, Oreo regained about 75 percent of his eyesight.

The experience bonded Oreo and his foster parents so much that they became a permanent family.