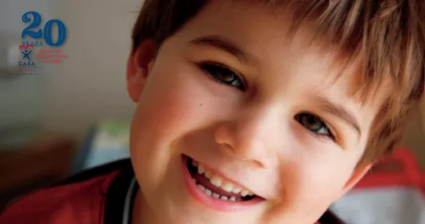 When you were a child, did you have enough to eat? Did you wake up feeling safe? Did you have parents or grandparents you could count on? If so, you were lucky. Zack didn’t have any of that.

He and his three brothers were born into a struggling family. Mom was a heroin addict who sold her son’s baby formula for drug money. An older brother tried to save Zack by feeding him sugar water. They called it “failure to thrive” but in reality, the baby was starving. At five months he weighed eight pounds. His ribs stuck out like the victim of a third world famine.

A judge in Washington County Dependency Court placed the boys into foster care and gave Zack the gift of a lifetime. She appointed Jackie as Zack’s CASA.

Jackie is a Court Appointed Special Advocate, a volunteer appointed by a judge to get to know a child, understand the home environment, consult with caregivers and teachers, and bring back comprehensive, unbiased information.

She understood Zack. Jackie also grew up in an addicted household, and as the oldest of five children, she mothered her siblings. She vowed “I’d never do to my children what was done to me.”

While she gave birth to two healthy children, she lost another six during pregnancy. She felt the message was clear: “God put me on earth to take care of other people’s children.”

When Zack was moved to a home in West Virginia, Jackie often made the three-hour drive to Charleston.

He lived there for eighteen months, the longest home he had ever known. Jackie was hopeful.

But when Zack was four, the foster mom drove back to Washington PA and, without notice, dropped him at Children and Youth Services. She said they couldn’t handle so many boys. He was out.

A new foster mom had to deal with Zack’s biological father, who wanted visitation rights with a boy he had never met. Jackie was still his CASA, so when Zack came back with bruises, the new foster mom asked Jackie for help. Since they were not actual handprints, the bruises could have been accidental. The court allowed the Dad unsupervised visits.

Jackie cared too much to give up. When Zack came back from a weekend visit with cigarette burns on his feet, Jackie and the foster mom informed the judge and eventually parental rights were terminated.

And then the miracle happened.

Nathan and Leigh were admitted to a fosterto-adopt program. They were asked to meet 4½ year old Zack.

“We were looking for a newborn,” Leigh Ann said,” But now I realize it was a God thing.”

“Let’s meet him,” Nathan encouraged his wife. “What do we have to lose?”

It wasn’t long before it was clear: not only did they choose Zack; Zack chose them.

“He saw us and came running and jumped in my arms and that was it. I had tears in my eyes- he is the one. We knew it. We fell in love with Zack.”

They received permission to take him camping, and he fit right in with their extended family. Jackie, who continued to act as Zack’s CASA, was overjoyed that he found a loving home. After Zack was adopted and her official commitment ended, Jackie stayed in contact.

“Jackie is so compassionate,” Leigh Ann says, “She never forgot his birthday or Christmas. She’s our angel who helped us be a family.”

Their happy ending turned bittersweet when his adopted father unexpectedly passed away. Zack, then ten, helped his mother through tough times the way he had been helped: with compassion and caring well beyond his years.

“Zack has a huge heart. He thinks about others,” Leigh Ann said, acknowledging divine help. “God gave Zack to me to help me through this.”

In the past twenty years, 325 CASA volunteers have advocated for more than 1400 Children. Can you be a Jackie to the next Zack? Go to casawashington.org/volunteer/