Our mission is to create and sustain a Christ-centered residential network and community in the midst of the city of Washington, engaged in the work of recovery from self-destructive behaviors.

Our mission is to create and sustain a Christ-centered residential network and community in the midst of the city of Washington, engaged in the work of recovery from self-destructive behaviors.

11   people have liked this story. 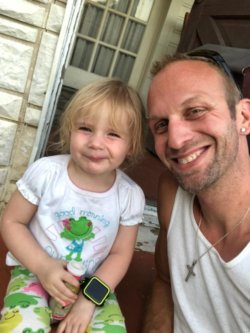 Like too many children, Maci was born into a deeply troubled relationship that soon ended in estrangement. Her father, Dennis, was a severe alcoholic who was in serious trouble with the law for multiple DUI violations. His poor choices kept him alienated from his fiancé, his parents, and Maci.

Admittedly, Dennis had made mistakes in the past, but he was willing to work for a second chance – not just in the eyes of the law, but also in the eyes of his daughter.

Facing the possibility of jail, Dennis opted instead to enter in-patient treatment for his alcoholism and the supervision of the court. One evening while at chapel, Dennis opened his heart to God and finally became open to help.

Going home alone on house arrest was an option. However, Dennis courageously made the commitment to enter and live at the Serenity House, one of Resurrection Power’s four Recovery Houses.

At the Serenity House, Dennis lived in a safe, structured, supportive, and spiritually-focused environment for recovery. It was there that he had the time and opportunity to learn how to live a new life without the use of drugs or alcohol. And, most importantly, Dennis learned what it really means to be loved by God and how to love others.

With time, Dennis began to regain the trust of his family and of Maci.  First with short visits, and then weekend stays, Maci and Dennis were able to begin the journey of building a new and healthy relationship. Dennis worked hard to rebuild what was lost, or rather, what was at risk of being lost. His four-year-old daughter can now look at him and smile. And despite a rough start, Maci now has a big advantage: A dad in her life who loves her.