7   people have liked this story. 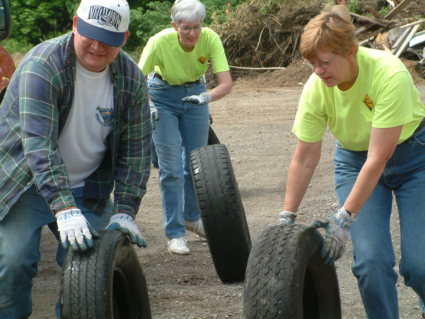 Ever since he was a young man, Michael Harcher has cared about the environment around his home in Beaver County, particularly Raccoon Creek.

"My family and I have been around Raccoon Creek all my life," Harcher said. "When I was little, we would spend time there fishing and having picnics. That's part of the reason I think it's so important to protect – because, if we don't, we rob other families of having the same memories I had."

When Harcher went to Penn State University, he earned a degree in Environmental Studies. But when he returned home from college, he realized something needed to be done about the world right outside his back door.

"Raccoon Creek used to turn orange because of mine drainage pollution and it was just horrible," he said. "It was clear that we needed to do something."

So, in the late 1990s, Harcher and other residents of Beaver County began work with Independence Conservancy, a non-profit group that focuses on cleaning up the waters of Raccoon Creek and revitalizing the natural areas around it.

Since then, Harcher has seen some positive changes to the waters and lands that he spent his youth in.

"There's definitely more aquatic life," Harcher said. "But there's always more work to do. We don't have 500 people working for us, we're just a small group that gets things done."

Harcher has been giving his time to Independence Conservancy for about 20 years now and doesn't intend on stopping any time soon. He hopes that someday soon areas such as the Rocky Bottom Natural Area in Potter Township will be a place for people to enjoy themselves and fish, hunt, and camp.

"Because our work with Raccoon Creek has been so successful, we've been moving on to other projects and things that will help out our community," Harcher said.

While Harcher and the others at Independence Conservancy have been making an impact on the environment in their hometowns, he also believes it has helped him grow as a professional.

"When I first started, I wanted to help the area and also make connections and do networking for jobs," Harcher said. "Because of Independence Conservancy, I've had some great employment opportunities in my field."