17   people have liked this story. 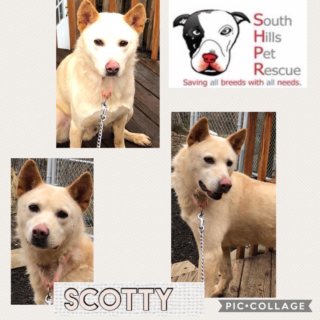 Have you ever seen a Jindo?

It’s a beautiful breed of dog that originated in South Korea, where it is celebrated for its fierce loyalty and bravery.

Meet Scotty. He is one lucky Jindo.

After being rescued from a dog meat farm in South Korea, two-year old Scotty made the approximately 7,000-mile journey to Pennsylvania. He arrived at the South Hills Pet Rescue (SHPR) in January 2018.

Yet, in another sense, Scotty’s most difficult journey was still ahead of him.

Emaciated, scared of noises, and fearful of humans, Scotty did not take any pleasure in the things that most dogs enjoy.

So, the SHPR team knew this pup would need special care in order to find a forever home.

The first step was to rebuild Scotty’s health. Steps were taken to rid him of his intestinal parasites. Then, Scotty received vaccines to prevent future illnesses.

As his body started to recover, the focus shifted to addressing Scotty’s extreme fears. Since he cowered when anyone even tried to approach him, staff knew it would be months before Scotty would even consider tolerating a human touch. With the help of a professional dog trainer, Scotty underwent hours of training. The experience helped Scotty to know compassion, love, and patience. Allowing Scotty to set the pace as he learned to trust was key.

The progress Scotty has made is extraordinary. He is now known at the shelter as the “love bug,” as he enjoys the company of his human and canine companions. Scotty looks forward to a good brushing, his favorite toys are ones with squeakers, and he loves to snuggle with his blanket.

What a transformation for Scotty and the people who did not give up on him.  He is now ready and waiting for his new family to give him a forever home.