A History of Compassion 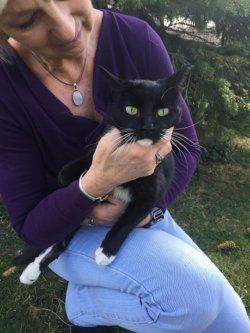 Ilene the cat was found severely injured and it is believed that she was struck by a car shortly before she was found. After an unsuccessful attempt to find her owner through Facebook, her rescuer brought Ilene to PetSearch for treatment.

"She had a large laceration all the way down a back leg that showed tendons," said Sherry Knight, PetSearch CEO.

Ilene's other rear leg had been broken in the past and healed improperly. The vet reported that because it was already healed and very calcified, it was too late to reset the bone to heal properly.

According to Knight, "Ilene limps a bit but gets around fine."

Shortly after Ilene's vet care, Ilene's foster mom said, "Yesterday afternoon, this little girl was a stray. Tonight, she in in my home…warm and protected. Yesterday, she was considered critical – a deep laceration displaying tendons and an injured leg. Tonight she is resting comfortably, in a bed, on antibiotics and pain meds after surgery. The laceration, after surgery, is stapled. Today she is no longer a stray… tonight she is cherished. She is now "Ilene" and she is safe and loved."

Sherry and Kent Knight began rescuing pets when they were first married. "We took in a 4-week-old puppy, which we kept, and a very pregnant stray cat, who had 6 kittens on our sofa," said Knight.

After working with their local animal shelter for two years, Sherry and her husband found they had different philosophies from those of the shelters regarding the saving of animals and decided to create their own organization.

"We started our own rescue organization in 1987 called 'People for Animal Welfare' with $1,500 and a few friends that believed in our vision. In 1996, we changed the name to 'PetSearch'," said Knight.

PetSearch is an all-volunteer, non-profit animal rescue and placement service with all of the pets housed in foster homes, most of which are in Washington County. PetSearch also offers pet therapy, human education, fundraising, feral cat rescue, and two community service programs: Rabies PLUS Clinic and SNAP (Spay/Neuter Assistance Program).

Since the creation of PetSearch, over 10,000 animals, unwanted by their owners, have been placed into loving, adoptive homes.

Manny, a domestic shorthair, tuxedo cat, arrived to the organization in an opossum trap. One of his hind legs' was deformed due to life outside, and because of this, he spent 6 years at PetSearch looking for his forever home.

"At every adoption event we took him to, he would always be in the back, sitting, with his head down," says Knight. "I had times where I thought he could finally find a home to call his own, but people either didn't want him because of his age, or they just never showed up."

Heartbroken with the lack of love and support Manny was receiving from possible adopters, Knight took Manny in as one of her own.

"It doesn't matter how old a pet is – days, months, years – we love them all the same," says Knight.