A Chance For Rescue

41   people have liked this story.

October 11, 2017 | By Dorothy Tecklenburg with contributions from Joshua Proud 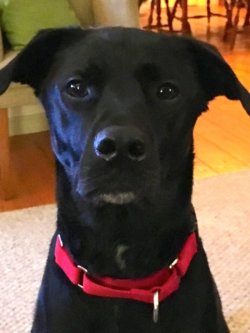 The large black dog with the droopy ears cowered in the van. His life had been hard. All he had known was fear, uncertainty and abuse. How could he trust these large humans who brought nothing but pain and misery?

His journey would be long.

An animal control agent removed him from his abusive home and placed him in a shelter. But the lab mix was too afraid of people to eagerly wag his tail when prospective adopters visited. Month after month, the black dog waited and cowered, not knowing that there was a thing called a forever home. No one took a chance on a dog who looked so unhappy.

The shelter could not keep him any longer.

He had one final chance at life and love: South Hill Pet Rescue. The black dog was named, fittingly, Rescue.

At SHPR, Rescue was rescued, slowly and lovingly. Volunteer dog behavioral specialist Nick Ferraro worked closely with Rescue, but it was five long months until he was socialized enough to be put up for adoption.

Brian Kelly and his partner Dave discovered SHPR through a friend on Facebook. SHPR had posted the "Dog of the Day," where Brian first saw Rescue. Brian and Dave visited SHPR, met Rescue and fell in love. They adopted Rescue and gave him his first loving home.

While the first four months were not easy, they were fully committed to Rescue and making the adoption work. At first, Rescue was afraid of everything - going for walks, new people and even stationary cars. It took months, but with lots of positive reinforcement, his behavior began to improve and Rescue began to feel comfortable in his new home. They learned that Rescue did enjoy being brushed, and after six months the black dog finally learned to play. Today, Brian and Dave cannot imagine life without him.

"Rescue is incredibly well trained and has even learned to bring in the newspaper for us," Brian said.

South Hills Pet Rescue (SHPR) in South Park houses homeless dogs of all breeds with all needs. Since it was founded in 2013, more than 1800 dogs have been rescued by this non-profit organization. SHPR gives dogs the housing, care and rehabilitation they need to find their forever homes, and is always in need of volunteers, donations, blankets, dog food and pet toys.

Donations are accepted through www.southhillspetrescue.org.

All these dogs want is a chance for a life full of love, and a family to call their own.